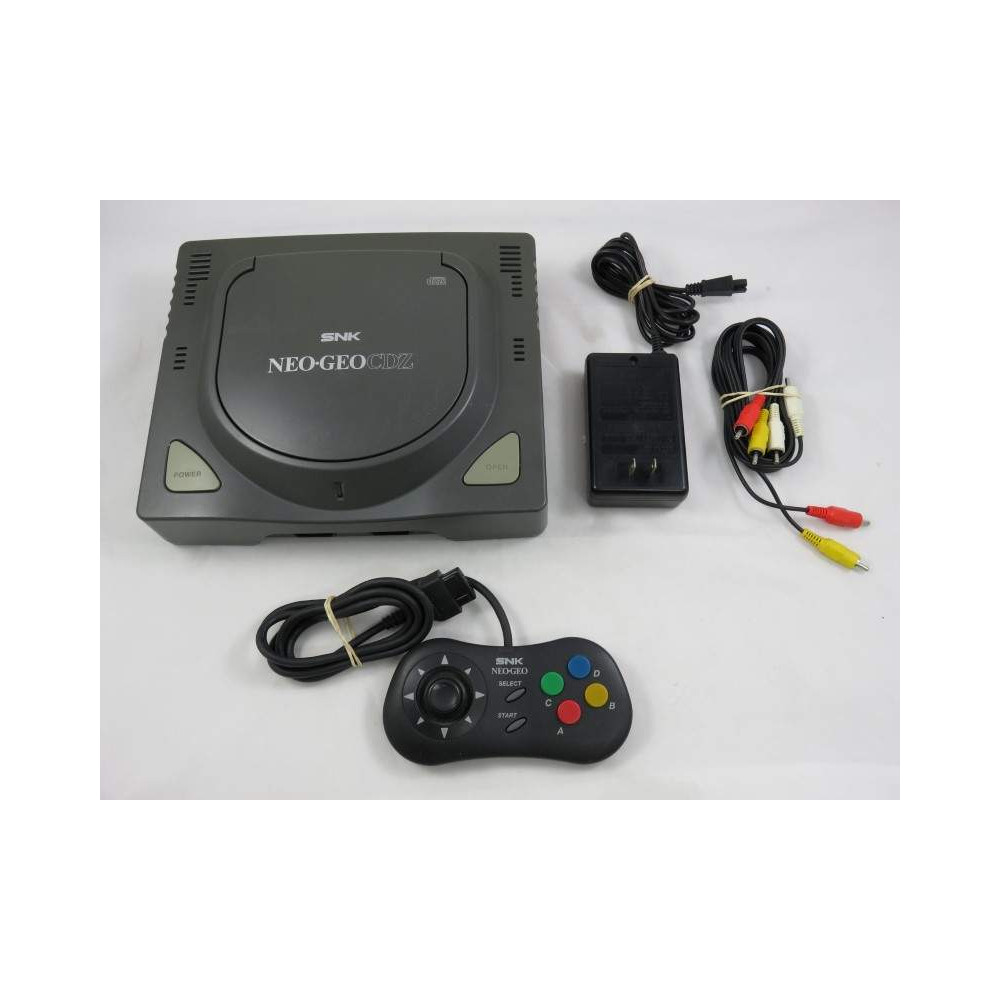 Second hand item, no box, no manual, good condition. some light slays on the front of the console

Comes with one controller and the cables. The Japanese plug requires a european AC Adapter

Neo Geo CD (Japanese: ネオジオCD Hepburn: Neo Jio Shī Dī) is the second home video game console of SNK Corporation's Neo Geo family, released in September 9, 1994, four years after its cartridge-based equivalent. This is the same platform, converted to the cheaper CD format retailing at $49 to $79 per title, compared to the $300 cartridges. The system was originally priced at US$399,or £399 in the UK. The unit's 1X CD-ROM drive is slow, with very long loading times of up to 56 Mbit of data per load.[citation needed] The system can also play Audio CDs. All three versions of the system have no region-lock. The Neo Geo CD was launched bundled with a control pad instead of a joystick like the AES version. However, the original AES joystick can be used with all three Neo Geo CD models.

The Neo Geo CD was first unveiled at the 1994 Tokyo Toy Show. The console uses the same CPU set-up as the arcade and cartridge-based Neo Geo systems, facilitating conversions, and SNK stated that they planned to release Neo Geo CD versions of every Neo Geo game still in the arcades.

Three versions of the Neo Geo CD were released:

The front-loading version was the original console design, with the top-loading version developed shortly before the Neo Geo CD launch as a scaled-down, cheaper alternative model. The CDZ was released on December 29, 1995as the Japanese market replacement for SNK's previous efforts (the "front loader" and the "top loader"). The Neo Geo CD had met with limited success due to it being plagued with slow loading times that could vary from 30 to 60 seconds between loads, depending on the game. Although SNK's American home entertainment division quickly acknowledged that the system simply was unable to compete with the 3D-able powerhouse systems of the day like Sega's Saturn and Sony's PlayStation, SNK corporate of Japan felt they could continue to maintain profitable sales in the Japanese home market by shortening the previous system's load-times.[citation needed]

In response to criticism of the Neo Geo CD's long load times, SNK planned to produce a model with a double speed CD-ROM drive for North America (as opposed to the single speed drive of the Japanese and European models). However, on the eve of the North American launch SNK announced a change of plans. Their Japanese division had produced an excess number of single speed units and found that modifying these units to double speed was more expensive than they had initially thought, so SNK opted to sell them as they were, postponing production of a double speed model until they had sold off the stock of single speed units.

The CDZ was only officially sold in Japan during its production. However, its faster loading times, lack of a "region lock", and the fact that it could play older CD software, made it a popular import item for enthusiasts in both Europe and North America. The system's technical specs are identical to the previous models except that it includes a double-speed CD-ROM drive